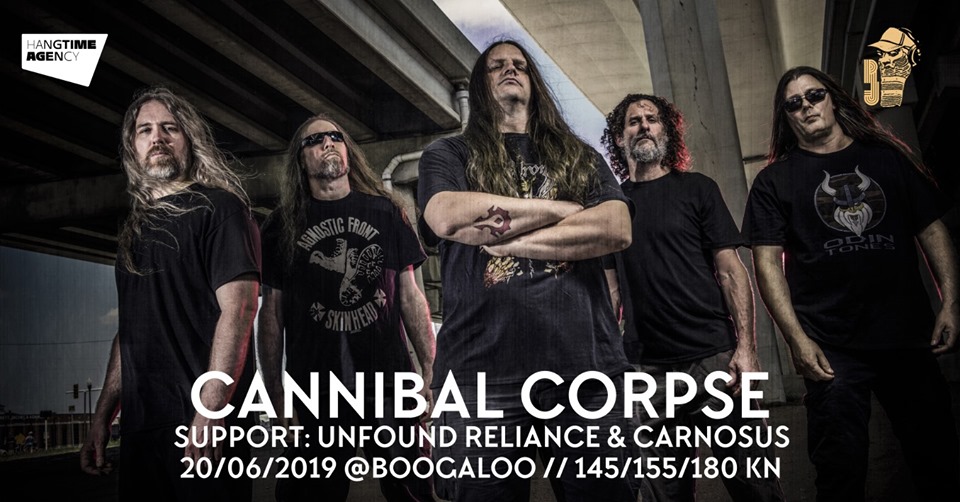 No better way to celebrate Corpus Christi than with Cannibal Corpse

The concert was indeed a national holiday and a real treat. It was great to see the legends once again. I think everyone came to see them, and that was awesome! Perhaps people had a free day since it was a national holiday, or everybody just likes Cannibal Corpse. Anyway the venue was packed.

The opener bands were: Unfound Reliance, a Swedish death metal band from Karlstadt played first. They apparently have positive and philanthropic lyrics about unity. My personal taste didn’t quite get me to like them much. Anyhow, they performed rather standard and unimpressive as an opener band. After the short opener act came the second opener act: a Swedish death metal band called Carnosus. This five piece from Orebro were a big step up in the death metal game. They performed violently and with haste. Without any memorable songs, they still managed to electrify the crowd and make the first rows bang their heads in unison. They motivated all the attendees to come closer to the stage and enjoy the show.

After the warm up bands came a rather long stage change break. In that time, I had the chance to observe the heaps of younger generations flocking to the first row. It was a pleasant sight, long haired middle schoolers all clad in camo and denim.

The hour struck 22:05 and Cannibal Corpse climbed on stage. They started playing 30 years ago, and have since become a brand of its own. They are the most popular extreme metal band, with a huge discography counting 14 albums, several demos, EP’s and lives.

I saw Cannibal Corpse several times during all these years and all of these gigs were great. The same I should to say about this one. Both music, stage work and response of people under the stage were very, very good. Actually I was a little surprised with this last one was so wild. They perform such complex pieces with ease. They have made the stage their home, which is awesome.

Countless tours have hardened their appearance and they truly are one of the best in what they do. Despite all the fame, the praise and glory the concert was done with precision and dedication to fans. There were several technical difficulties during the performance, with guitars falling out of the mix completely. The vocals were less understandable than usual, and I had a hard time keeping up with what was being sung. The rest of the crowd seemed to dig it though. Despite the +45° temperature, people banged, moshed and enjoyed themselves- everything that made a concert really fucking awesome. The set list was satisfactory. Of course, die hard fans will always want more, but taking into consideration for how long we waited for this concert in Croatia: the overall impression is good. All in all, I have to salute the local crowd for showing their best, giving it all and enjoying their beloved band despite all the nit picky errors.