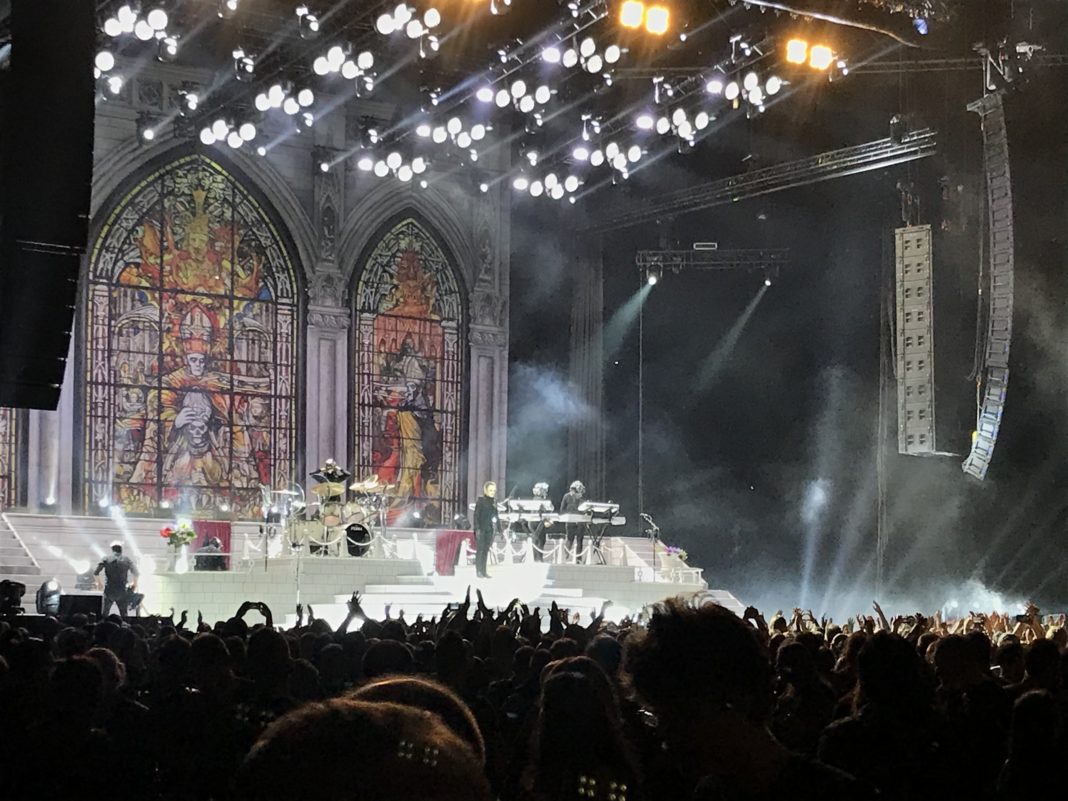 On this tour Ghost is promoting their new studio release Prequelle, which led them to Grammy nominations. Tobias Forge, mastermind of this project, created a lucid mix that combines the style and atmosphere of ’70s occult rock and the melody of Swedish pop. The album is full of occult anthems and brings a unique and vintage style, and with its new innovative approach it has succeeded in attracting younger generations who are not so familiar with the more traditional elements.

A band led by talented musician and even more talented showman Tobias Forge is always finding a way to amaze his audience again and it can be said that every new appearance is captivated by the introduction of new elements and surprises. Of course, we emphasize that bands that conceal their identities and use ritual elements such as the distortion of the Catholic Mass are not new to the scene, and Guest brings a special and new level of innovation in his play with elements that are considered taboo and untouchable. Ghost plays around with both anonymity and ritual, but in such a way that you always remain a bit genuinely surprised in which direction this musical marvel will go. This is a difficult task nowadays, and we must certainly acknowledge their high level of creativity and innovation.

The concert started with the maestral “Ashes” which threw all loyal fans into a trance and the long wait, the cool hall and all possible shortcomings were forgotten as the audience caught on fire and enthusiastically greeted the band. The concert continued with uncompromisingly low-key hits with excellent audience response, as the frontman maintained excellent communication with the audience. We have to notice that there were a lot of members of the younger generation in the audience, whose members, as in a trance, danced to hits like “Dance Macabre” and “Kiss the Go-Goat”, which is really a great success.

To make the show even more attractive: Copia changed his clothes several times, and the most notable was the moment when he was brought to the stage wearing a white tricycle suit, but also the appearance of Pope Nihil, who performed his saxophone solo in the song “Miasma”.  The program of almost two hours passed in an instant.

And the Pale Tour Name Death, as the tour was called, did not get as much audience response in Budapest as in other locations, but despite its slightly lower attendance, we suspect that the energy of the entire show was less than at the sold-out concerts.

Cardinal Copia and his band, Nameless Ghouls, have made every effort to make fun of all the fans and have succeeded in doing so. Tobias Forge in the role of Copie is a great leader of the ceremony with a great sense of stage performance and audience engagement and uplifting atmosphere. His sensual flanking, soft sliding on stage and constant playing with the rest of the band, as well as the audience, certainly contributed to the atmosphere of the hall.

The concert ended after the song “Square Hammer” and it is really rare to see such a well done concert after which there was no trace of sadness that ends because the atmosphere, dynamics and musical skills of the band itself could satisfy even the most hardcore fans. Great concert, we can’t wait for the next occasion when we will be able to see the band live because we know they are preparing something new and unique for us again!