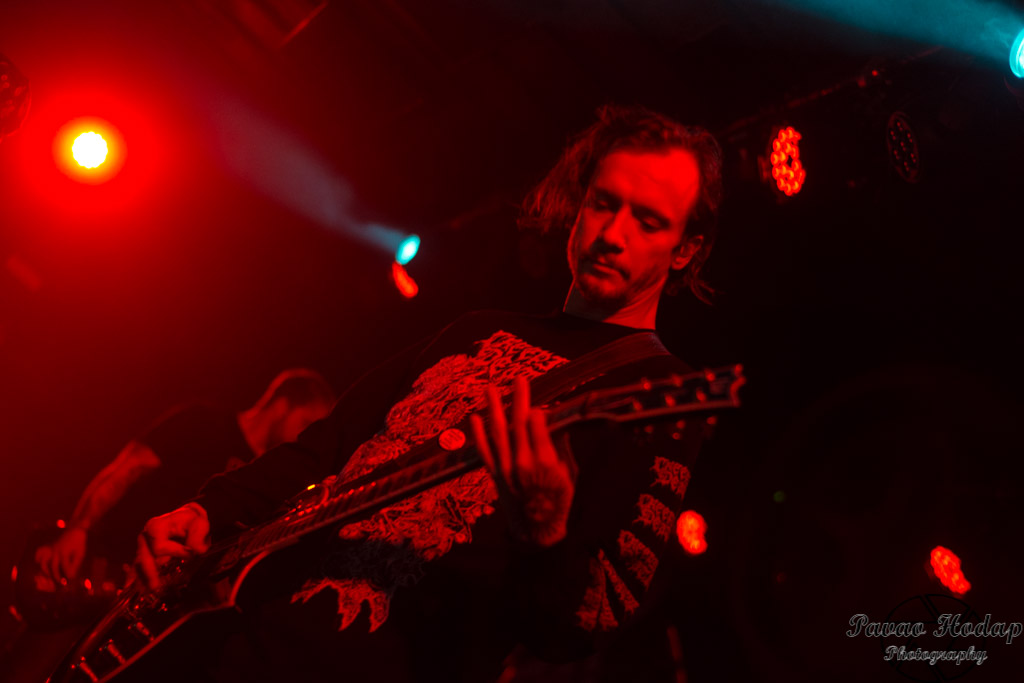 Time slowed down to present the resurrection of Lazarvs

The evening started with a warm-up premiere listening of the new album of SHE LOVES PABLO, a groove rock band’s album. Sounds promising, hopefully there’ll be a chance to check out the band live.

The concert evening started with the opening band HRMÜLJA, Croatian band from Ludbreg, that has released the debut self-titled album in April 2019. The band itself considers them to be an alternative stoner doom metal band and you definitely shouldn’t be fooled by the late release of the debut album, as the band existed in various setups of members from 2013 and the maturity of musical abilities of the band members is visible. The band was definitely worthy of following and gave an excellent performance. Only objection would be that they saved the best song to be the last one. Those who don’t know the opus of the band need the best intro into all the band has to offer a bit earlier during the show. But, in spite of this minor objection I was very glad to see that the band already has a small army of fans and surely, we can expect more from the band in the future. Their very kind thanks to the fans and an invitation to the backstage was very nice.

Vintage Industrial Bar became fairly packet around half past 11 PM, just in time for the LAZARVS concert. Although the crowd was admirable, I could not shake the impression that it’s a shame that the band of the Lazarvs calibre hasn’t attracted more people, as I found the band itself to be underrated.

Budapest’s Lazarvs, formerly known as Apey & The Pea changed their name this year. They have established their status as one of the bands you must follow especially if you’re an admirer of the fusion of sounds, with emphasis on the bands unique style in which they successfully combine stoner, doom, sludge and other bits and pieces of heavy metal sound. The band is currently working on a new album called ‘Lazarvs’.

The setlist was very well balanced, as the band didn’t leave the best for last and more dynamic songs were played around the middle of the concert, which engaged the audience to relax and enjoy the concert itself even more. The biggest hit of the band, very catchy song “Pothead” was played as a sixth song and the receipt from the audience was great. I’m amazed how the song still hasn’t become viral and gained a world success, as it has the full potential to succeed in “the world domination plan”. Maybe, that’s the next big hit awaiting to be sky orbited any second- as we speak, all it needs it’s just a little push or some publicity. I’m not so fond of the song “Pothead” because the message of it, but because of the atmosphere and the state of mind it successfully transfers. Other hits that got a very good response from the audience were “Slaves” and “Death”, but some others also.

I must admit I didn’t expect such an energetic live performance, as the band consists of three members but perfectly rehearsed songs sounded even more dynamic and explosive due to the charisma of the vocalist and guitarist Andras Aaron “Apey” and especially the drummer Laszlo Makai, who rose the level of the explosiveness and had a major part in spicing up the performance. The third member, the bassist Zoltan Prepelicza, also functioned unified with the band and was a strong link in engaging the audience into full enjoyment. The live experience of Lazarvs was somewhat unexpected but a very pleasant surprise as they masterfully combine sharp riffs and endlessly long grooves into the unique atmosphere of altered state of mind- with no substances whatsoever needed!