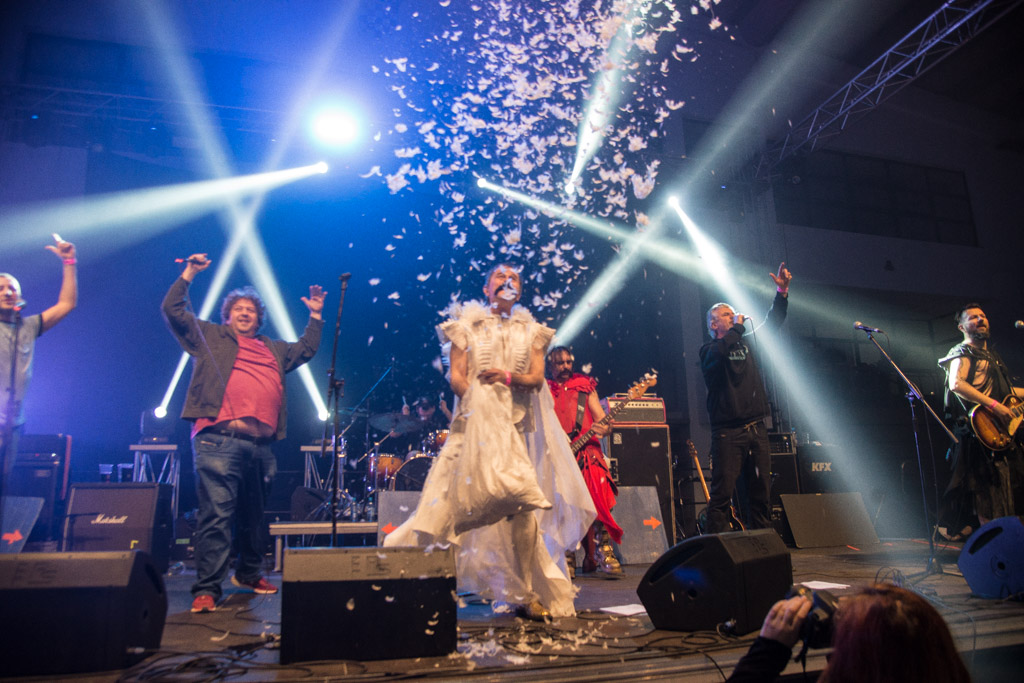 In addition to the hosts of Let 3, the headliners of the festival were the heavy metal band Živo Blato and the alter ego of Saša Antić – Alejuandro Buendi.

ALEJUANDRO BUENDIJA opened the festival and had an difficult task of engaging the audience that was slowly starting to arrive and were scattered through the concert venue. The performance was solid and the mission was acomplished. Alejuandro Buendija, better known as Saša Antić (TBF) is the award-winning author and performer, accompanied by his Sinovi. His latest album “Škrinja” has been hailed by music critics as the “soundtrack” of the pandemic.

The performance of ŽIVO BLATO was the absolute peak and pure perfection. Croatian heavy-metal band Živo blato, led by the charismatic General Vasilije Mitu (also known as Siniša Vuco), and there are Veseli Sir, Mr. Rabbit and vocals Nazifa Gljiva and Trudna Tableta proved to be the band that brings the audience to the absolute peak. The audience went wild, all the hits were performed with the sing-along audience with outbursts of ecstatic joy as the most fun band finally performed live after quite some time of absence for the stages. Siniša Vuco is a legendary and very funny character with a special charisma which doesn’t reveal is he really „a cave man“ or just someone who is wise enough to exploit the endless fun that character brings too people. Živo Blato absolutely dominated the stage and the venue, bringing the atmosphere to the boil. It was great to see that the band also has very young fans. The highlight of the concert was the point at which two hostesses brought „lamb prepared for the grill“, as a representation of all local gatherings organized by small town folk. We may make fun of them but certainly we love their traditions and their mentality enriches all of us as it takes all kinds of people to make one country great. Politicians we hate, but all the people that are slightly different than us: they are there to enrich us and make us learn something new.

VILI & DEBILI were the surprise guests that rocked the audience with a surprise hidden stage popping out of the blue and created an impression as if we were transported into a club gig with a miniature stage and uncompromised rock ‘n roll performance. The band itself is consisted of Vili, Dado Gobac and Srđan Sekulović Skansi. What can I say about the performance? It was a surprise! But, all things aside its been really good seeing Davor Gobac being rejuvenated and resurrected into a band with younger members which only brings out the best in all of them. I’m looking forward to seeing more of them, for sure.

LET 3 has announced the promotion of the long-awaited album for this year’s Anti-Valentine’s Day, which will feature the most popular songs from their vast musical opus in completely new versions. Let 3 presented many guests to the stage, with whom they performed remakes of the older hits, but also the new that will be on the new album. Let 3 were the creators of the idea of a festival named Antivalentinovo that went through many challenges as an event and faced cancellation due corona pandemic so, naturally we were delighted to be present at a festival after all the misfortune and troubles during the past period. In fact, last year’s Antivalentinovo was the biggest highlight of the year as it was held as a first bigger event after the lockdown. Unfortunately, the festival never outgrew the original thought of being the biggest Croatian festival, as quite frankly, we as continuously seeing the same bands over and over again. A nice change would be to invite some of other, regional known bands in order to introduce some refreshment and diversity. Unfortunately, times have changed as older audience still remembers the „good old days“ at which Rock festivals gather much bigger audience.

We were absolutely thrilled to see Let 3 at their peak performance, as the last time I saw the band at Medika, Zagreb- I wasn’t all that thrilled by the performance. The band gave their baest and the performance was in line with all our expectations and can easily be compared to those that the band gave at their best days. Even the outfits were great and didn’t just leave WTF impression but actually made an artistic, political and globally aware statement.

Majority of the audience saw Let 3 live numerous times, so it was a real refreshment to see their choice of surprise guest artists. Marina Perazić, TBF, Alen Vitasović joined the band on stage and at it was heartwarming to see Marina Perazić on stage as we all know female artists are often pushed into retirement before the male ones so we are always glad to see successful and thriving older female artists still performing. Let 3 was joined also by Ivanka Mazurkijević, who performed the recently published collaboration with the band, the song: ”Tvoje su priče Eiffelov toranj”.

So, overall Let 3 performed the greatest hits in line with audience expectations and gave an excellent and finally: a refreshed performance.

The motto of AntiValentine’s # 7 is: “No music, just fucking” but luckily for us it proved to be wrong, although…if you listen to the song: Živo Blato – Estrada… it cloud make you think…everything you ever experience is not a meter of objective facts but rather your personal choices, experience and strength to choose a better option no matter how hard it could seem at first. Croatian bands that don’t play commercial music, especially the underground bands playing Black Metal or other similar genres will probably never make a living out of it, but they will always know that they lived their life right and on the right side.