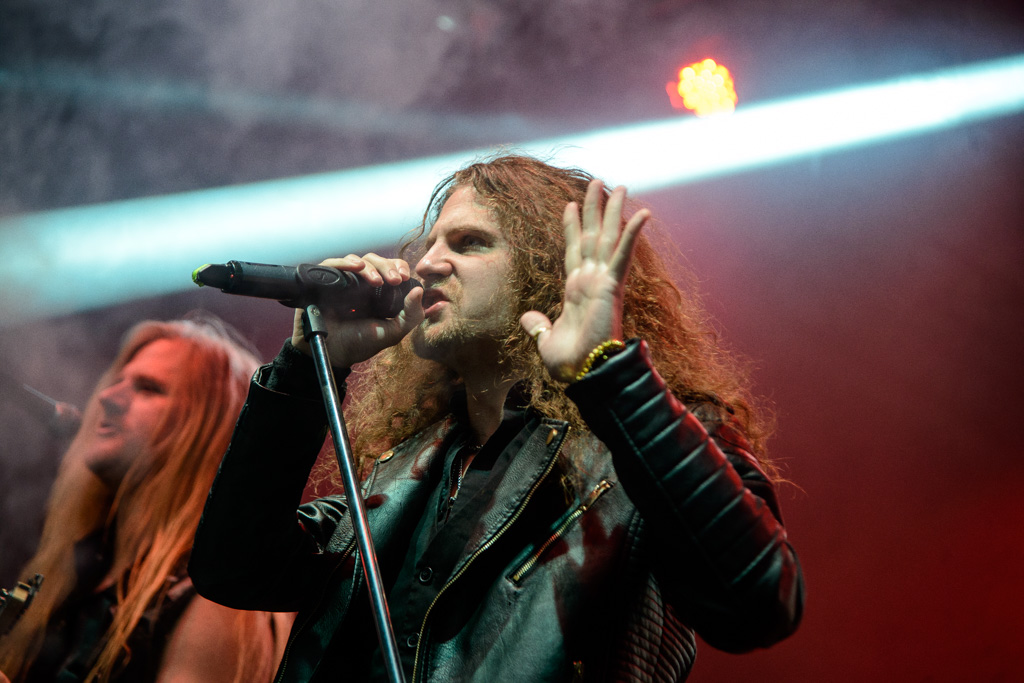 Finally, the long awaited day has arrived: this metal feast seemed like a festival as it offered a selection of the bands for everyone’s liking: from heavy, gothic to progressive metal with special glimpses from other genres also. Last night Močvara hosted bands and band members from Sweden, Norway, Czech Republic and the USA, but also from: the Faroe Islands, France and other! This was definitely the best concert you could see in Croatia so far, this year! The venue was packed, the audience exhilarated and it was a very special occasion to see such great bend in a very cozy atmosphere of our favorite concert venue. Klub Močvara has definitely earned that title as the concert season they have prepared looks great!

HOLY MOTHER (USA) is an American Melodic heavy rock band from Long Island formed back in 1994. In 1996 when the band had been going by the name N.O.W. and they released a full-length CD, “Tabloid Crush”. Up to now, they have released six studio albums and published “Face This Burn” in 2021 which they promoted last night at Močvara.

The band has established its reputation in the 1990’s when they released the albums: “Toxic Rain”, “Criminal Afterlife”, “My World War” and “Agoraphobia”. Come back of a band was publically announced with a release of the new album called “Face This Burn” in 2021, for the: Massacre Records. The European tour started in December of 2021 but was interrupted because of COVID 19 restrictions, so finally now was the perfect timing to continue the started work.

The band presented a set of songs filled with heavy melodic metal, powerhouse vocals, guitar shredding along with heavy bass lines and strong drum support. The vocalist Mike Tirelli was simply excellent and his powerful vocal especially delighted the audience during the special highlight of the evening: performance of “Holy Diver”, a special tribute to the voice of metal, Ronnie James Dio. Another highlight was “Wake up America” which has a special importance to the band as it states all that they find wrong with their society today and scream out for an urgent change in the mindsets people wrongfully cherish. The concert ended with performance of “Toxic Rain” and overall it was great to see that the venue was packed, although it was an unusual early start of the concert.

SURMA (Czech) is a project backed by Czech-Ukrainian singer Viktoria Surmova and Harry Joensen, the vocalist of the famous folk metal band Tyr from the Faroe Islands. The band was formed in 2018 and their debut album “The Light Within” was released in 2020 by Metal Blade Records, with several singles that have already earned significant publicity: “Reveal the Light Within”, “Until It Rains Again”, “Emptiness (Is No More)” and “A Yuletide Tale”.

Their music can be described as a combination of symphonic and progressive metal. Interestingly, they are the first Czech internationally signed Metal band and the band is lead by the stunning model Viktorie Surmová.

The concert they gave proved that their reputation of one of the most soaring, dramatic and moving symphonic metal bands on the contemporary scene. Their songs describe epic stories, life struggles and love experiences that are easily relatable, especially in a performance of a talented and charismatic singer Viktorie. The feedback from the audience was great and I cant even describe the level of excitement that we finally got to see such great bands after a break that has been too long due to all the corona restrictions.

Special credits go to the incredible vocal Viktorie as we are so happy she was able to perfom inspite of a heavy injury she endured. Unfortunately, she accidentally burned her legs, but nevertheless had and excellent performance and was dancing and jumping all the time although its hard to understand the level of pain she has endured in the process. Also the drummer demonstrated that he is a pure genius as he stepped in “at the last second” and had only few hours to prepare for the songs he doesn’t play on regular basis! Unfortunately, the regular band drummer was held up at the border and couldn’t enter the state.

The highlight of the concert was performance of “Downfall” which fired up the audience in an incredible sing-along from everyone together with a band. Due to the incredible charisma and inexhaustible energy of the vocalist Viktorie, I’m sure that many will carry the memory of the most incredible performance this evening.

SIRENIA (Norway) celebrated 20 years of the band last year and have released 10 studio albums so far. They are a gothic symphonic Metal band which is considered to be one of the most influential bands of this genre in general and are considered as a Symphonic metal institution

Sirenia was formed by Morten Veland in 2001- when he established himself as a main songwriter for the band defining the recognizable gothic metal sound. Morten is also known as a talented multi-instrumentalist, composer, songwriter and producer. The band has greatly gained by joining of the great French opera singer Emmanuele Zoldan (Trail of Tears, Turisas).

Their albums have made a significant success in the charts, receiving great reviews and audience feedback which led to execution of a successful worldwide tour. Sirenia is known as a band that creates a mixture of gothic metal and rock with classical orchestrations, in addition to some elements from melodic and other, more extreme metal genres. Their sound is built from a creative combination of powerful drums and bass supported by massive rhythm guitars, with atmospheric keyboards, melancholic violins and 12-string guitars. Their songs are melodic, very intense and dynamic. The lyrics are based on reflections on life, death, love, hate, paranoia, anxiety and mental decline in general. The vocal styles are diverse and consist of female vocals, choirs, growls, screams, clean male vocals, whispers and samples which brings a special dynamic and drama effect to specific songs.

Sirenia released their tenth studio album “Riddles, Ruins & Revelations” in February 2021 via Napalm Records. The album provides an interesting and innovative mixture of familiar sound of the band combining a heavy symphonic sound with modern influences such as special electronic vibes and elements they introduced to their sound.

This was the second performance of Sirenia in Zagreb and they have totally dominated the stage with an tireless tirade of numerous hits which brought the audience to ecstasy. It’s too hard the pick put the favorite parts of the concert, but performance of “Into the Night” exhilarated the audience and brought everyone to ecstatic sing along. Their musical performance was flawless as we expected, but the special strength of the band lays in an therapeutic power to take everyone to a very special state of mind where only happy thought, happiness and positivity exists and I was overjoyed to experience that live! The concert was concluded with a magnificent “Voyage, voyage” (Desireless cover) which was a very uplifting conclusion of an excellent concert!

DYNAZTY (Sweden) is a hard’n’heavy band from Stockholm. They were founded in 2007 and have released seven studio albums so far. Straying from their early days of the 80’s influenced by Hardrock, the band has developed and refined their sound into a real Melodic metal treat which merges several styles present in contemporary metal scene.

They became a very respectable name and were streamed over 30 million times and charting high in countries all over Europe. Among others, they have collaborated with Peter Tagtren (Hypocrisy, Pain).

Dynazty justified their reputation as a one of the greatest live bands within their genre. The performance was flawless, packed with energy, only positive vibes and very uplifting. The audience was ecstatic and no one was lest unimpressed by the elevating energy from the band who gave their all on stage and received ovations and the greatest feedback from the audience. The venue was on fire! They’ve opened the concert with “In the Arms of a Devil” which led the audience strait into their magical word of positivity and uplifting good vibes which provide an instant transfer into a happier state of mind in everyone present. It’s too hard to pick the best out of the endless series of hits, but their newest song they have promoted: “Yours” was magnificent and just: pure perfection. Of course, it was great to experience “Raise Your Hands” live and the overall conclusion is that the performance they gave could get any better as we were all left with a feeling of ecstatic happiness due and incredible experience of finally seeing Dynazty live!

Special treat after every concert was the friendliness of all band members who came to see and talk to their fans and a special thanks goes out to them as well as the concerts promoters, hosts and the team that organized the concert in Zagreb!