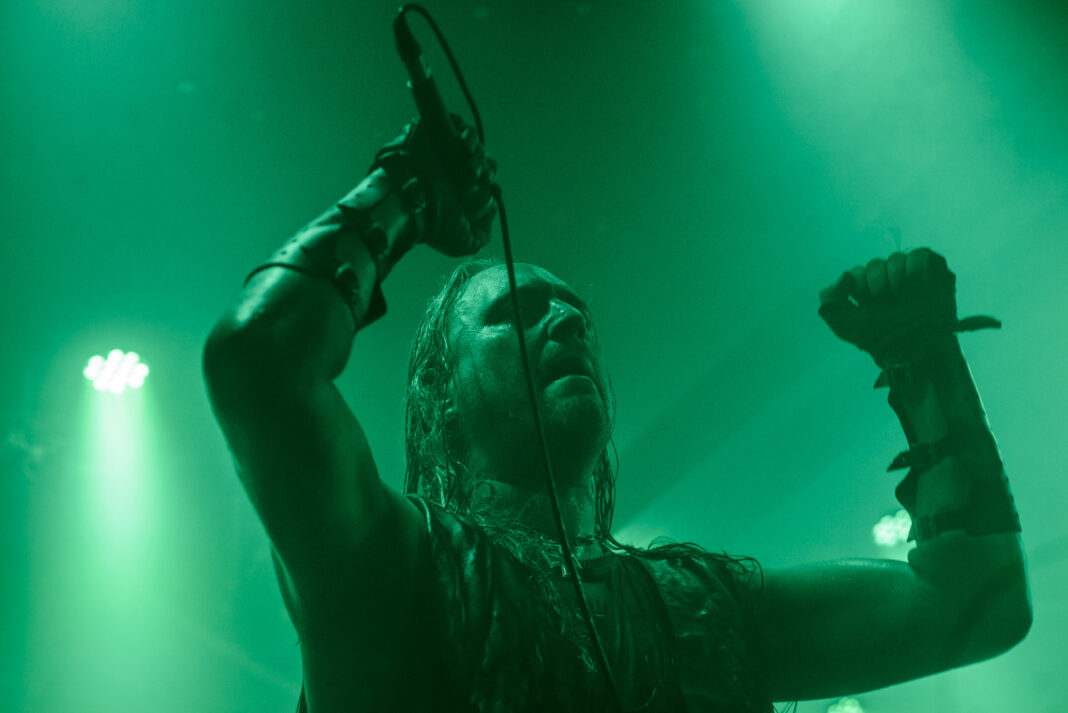 MOORAH are post black metal band from Prague, formed in 2019, previously active by the name: Moora. Their first full-length album “Marnost nad marnost” (“Vanity over vanity”) was published in 2021. Marnost nad marnost is not a conceptual album, but all songs are united by a common motive of faith and destiny of an individual in the apocalyptic world. Some of the Count Hroozah’s lyrics were previously published in literary magazines and in his book of poetry. Moorah’s music doesn’t succumb to the trend of overproduced underwhelming black metal; their sounds are created with the use of instruments self-created by the band. Authenticity, intuitiveness and the power of the message is paramount in the music.

Specialty of the band is that the lyrics haven’t been translated into English and they sound very good in Czech. They gave an excellent performance, and all we can say is:

SKAPHOS are black/death metal band from Lyon, France; which was formed in 2018. Skaphos is consisted of four experienced musicians who have already played in different bands. Their lyrical themes evolve around Abyss, Lovecraft and similar themes. They published two full-length albums: “Bathyscaphe” in 2020         and “Thooï” in 2022. Signed with The Flaming Arts Agency, Skaphos tours in Europe with bands like Marduk, Belphegor, I Am Morbid, Hate, Vader and other.

Consistent with what inspired it, the songs combines elements of black and death metal to create a feeling of tension and turmoil. The feverish riffing, the rapidly battering drum work, and the combination of guttural roars and lunatic shrieks bring us into a nightmarish world, and the flaring pulse of the guitars has a piercing quality that gets stuck in the head, too. Undergirded by an ominous bass line, the music turns out to be dynamic, and even mesmerizing in its manifestation of hallucinatory visions and vanishing sanity.

DOODSWENS, a black metal band from Eindhoven, Netherlands unfortunately cancelled their show due to personal reasons which was a real shame. They were the band many were looking forward mostly from all other opening bands and we sincerely hope we will have the chance to see them soon live in Croatia. Please do check out the bands discography and prepare yourself for their next gig!

Unfortunately, we missed bits and pieces of shows given by opening bands as it was a rather hot day and it was a crying shame that the concert wasn’t organised as an open-air gig. The venue became steaming hot in a matter of minutes and only die-hard fans could endure the heat and stay put for the whole duration of the concerts. Croatia definitely has the capacity to organise more open-air gigs, so hopefully there will be more of them in future. We decided to save up all our energy for Marduk.

MARDUK are the cult Swedish black metal band that successfully reigned for more than 30 years. Lyrical themes of the band are focused at satanism, anti-christianity, blasphemy, death, war, history and similar. The war-themed songs especially stand out, such as one of my favourites The Blond Beast from very well noticed and recognized album: Frontschwein.

Marduk is consisted of: Mortuus – Vocals, Morgan – Guitar, Lindholm – Bass and Simon – Drums. Morgan formed the band in 1990 with the intent on creating the most brutal and blasphemous metal act ever. The ”Fuck Me Jesus” demo was released in 1991 and immediately their first live appearances have been considered cult shows. Debut album ”Dark Endless” was recorded in June and released during the winter solstice in 1992.

In Mesopotamian mythology, Marduk was a Babylonian storm god who created the earth and sky from the slain body of the great dragon Tiamat who, with her consort Abzu, created the first generation of gods. Marduk then slew their son Kingu and used his blood mixed with earth to create humanity. He was revered as the patron deity of Babylon. Morgan has stated that many have misunderstood his rationale behind choosing the name Marduk for his band. According to him, the purpose of selecting it was to promote a blasphemous irony, as the deity Marduk represented light, but the band’s message is the complete opposite of that. In other words, it was intended as a mockery. While the vast majority of the band’s material is black metal, their first demo and debut album were death metal. The band abandoned this sound shortly after the release of their first album.

The bands discography is highly impressive, as the band has released 14 full-length albums, 7 live albums and it also includes almost an endless list of other editions, such as Eps, compilation appearances and other.

After a great concert at VIB, Zagreb in 2019, Marduk returned to the same “crime scene” once again. The power of Marduk lies in their legendary status of a great live band that proven their reputation once again- as the performance was a brutal attach to all your senses without any setbacks or signs of band members getting old or tired. Marduk deserves nothing but respect and admiration after their well-deserved grand celebration of 30 years of existence of the band. I would describe their style as a “military brutal guitar riffle attack” as the dynamics and uplifting tempo sets them apart from all other bands and makes them unique and incomparable to any other. They play very creatively with a fusion of styles and definitely are not a typical black metal band but have evolved into a magical and mesmerising phenomenon that has a power of instantly creating new fans and followers among younger audiences that are entering the scene. Their old army of fans remains solid and faithful proving that the band ages like the fines of wines: only to gain more on their quality and without losing their edge. Their musical bravures, magnificent and timeless hits and showman skills engaged the audience like no other band I have ever seen perform at Vintage Industrial Bar! Many songs received a great feedback, including “Frontschwein”, which many expected to be played. We didn’t hear all the song we wanted, but it only proves that the opus of the band simply became too rich and many have their favourite ones- which can not be squeezed into one concert. The concert ended in a flash and of course it seamed too short but it also proves there were no pauses (apart for some technical issues pause) that would make us feel that the band is slowing down. 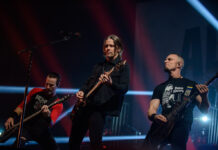 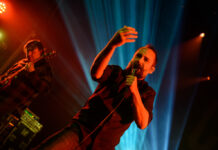