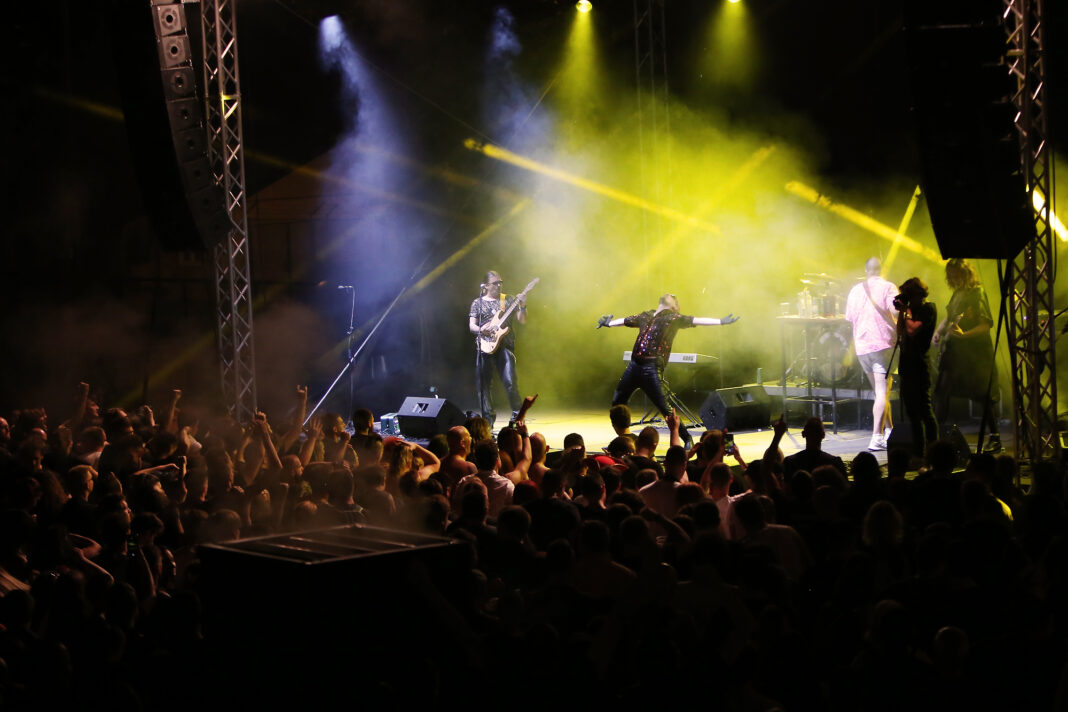 BRKOVI have finally held their big open-air concert with a special guest: Internet comedian BLOGGER KRULE, who is described as the main line of defense and protection against stupidity in Croatia. He’s one of our most famous bloggers and critics of the society, whose actions on social networks have been followed by more than 300,000 people for years. It’s definitely was a big shift and a giant step forward for him to perform before such a large audience. Mainly I do love and appreciate his work, but somehow my company wasn’t impressed by his performance and it made me think: maybe he wasn’t the perfect choice. Main reason would be that I go to concerts to relax and forget all the problems caused by politics and catastrophic state in our state, so I wasn’t quite in the mood to listen to performance that targets the right problems in a right way, but unfortunately at the wrong time.

BRKOVI present themselves as: a Balkan punk folk wellness and they are among the most attractive bands in the region. With a performance in Munich in the spring of 2022, they started the tour “New Abnormal” which consists of almost 30 concerts, and more are expected. Band released two great new singles: “Tata ti je zao” (which exceeded more than 80,000 views on YouTube in just two weeks) and “Više ni punkeri ne slušaju punk”, which will be on the next studio album. They also released a double album “Najveći hitovi 2009. – 2019.” (“The Greatest Hits 2009 – 2019”), their first vinyl release. The band also released a craft beer whose first edition sold out in record time.

BRKOVI made a big entrance making a first song their last;) They performed “Više ni pankeri ne slušaju punk” (“Even the punks don’t listen to punk any more”): which instantly became a huge hit as it hits right in the spot. Their greatest hits that are on the You Tube channel Brkovi alone- have been listened to more than 72 million times, with a huge jump of as much as 15 million in the past six months.

The season of big open-air concerts has started in a best possible way as I couldn’t possible imagine more fun band than Brkovi as they are the masters of creation of incredible events filled with laughter, fun, beer and good emotions only. Hala has an advantage before other open air venues as they have a grandstand accessible to all, so all generations could attend the concert as they have accessible seating stand that enables perfect view to the stage. We had fun trying to count number of overpriced beer being thrown into the air above the audience, but stopped very quickly as it was closely to impossible.

All hell broke loose as “Tolerancija” started, as it fired up the audience to the boiling point and the beer throwing started. After an half of an hour I realized that it’s impossible to count out the biggest hits of the band, as there are too many! It’s impossible to pick out the favorite out from the endless stream of hits, just to name few: “Pizda Materina”, “Kurvo prokleta”, “Nisam ja za tebe”, “Srećo laku noć, dobro jutro tugo”, “Cvjetalo je meni cvijeće” and “Skupe Bomboniere”.

Likewise, it’s also impossible to point out the highlights of the concert as the hits were unmercifully attacking the audience one by one.

The main factor of surprise was to see that Brkovi has a very strong army of fans, as dozens of people were hurrying to see the concert already wearing the bands T-shirts. Might I add: it’s very well deserved, as their sense of humor, creativity and level of intelligence they use in order to create the greatest parody that exists in Croatia- is almost too hard to grasp or understand. Brkovi is one of those phenomenal band that sound simple and basic at first listening, but they find cunning ways to get under your skin and win you over forever, as everyone will easily relate to extremely fun and humorous lyrical descriptions of our absurd reality!

The above stated is brutally evident in their song: “Hoću da mi dijete sluša narodnjake” (“I want my child to listen to folk”). They have turned the most horrific nightmare of every normal parent today- into a brutal parody of today’s sick society in which all true and decent qualities and values can simply be thrown to trash as it’s a “dog eat dog” world in which being a decent and nice person counts for nothing.

I extremely despise Croatian and Serbian modern folk trash and Brkovi have taken bits and pieces of it and turned a piece of complete shit into a very fun parody with some very strange twists and I believe that is the main characteristic of true artists. The most difficult task in the world is to change one’s mind and make a person like something they despised before. Brkovi made an excellent task during that process and I really do admire them.

The concert was a fiery explosion of positive emotions fuelled by alcohol and good intentions and the encores proved that several songs deserve a second performance, such as: “Pizda materina” and “Kurvo prokleta”.

I’ve even met s the greatest fan of the band, a 18-year old boy who stated that he was living for this moment for the past 6 years and has forgot all about threatening prospects of summer school. It made me feel young again, just to have the privilege to be around that kind of energy that we don’t see every day and sometimes barely remember from our own youth: from the days music and concerts were all we lived for! But, when I think about it some more: it still is! Maybe I wouldn’t sell a kidney to see my favorite band live, but will definitely give my all not to miss it. Fucking Corona at least teached as all a lesson: NEVER EVER miss a chance to have a good time and support your favorite band live!!

COPYRIGHT NOTICE © All photographs are under the copyright law. They cannot be copied or reproduced without permission given by the author. It is not allowed to crop, alter, or change the photographs in any way, or removing the watermark sign of the author. Legal action will be taken if discovered any non-permitted usage or photography manipulation. We kindly ask to inform us about such misusage by sending an e-mail to the author. Thank you.