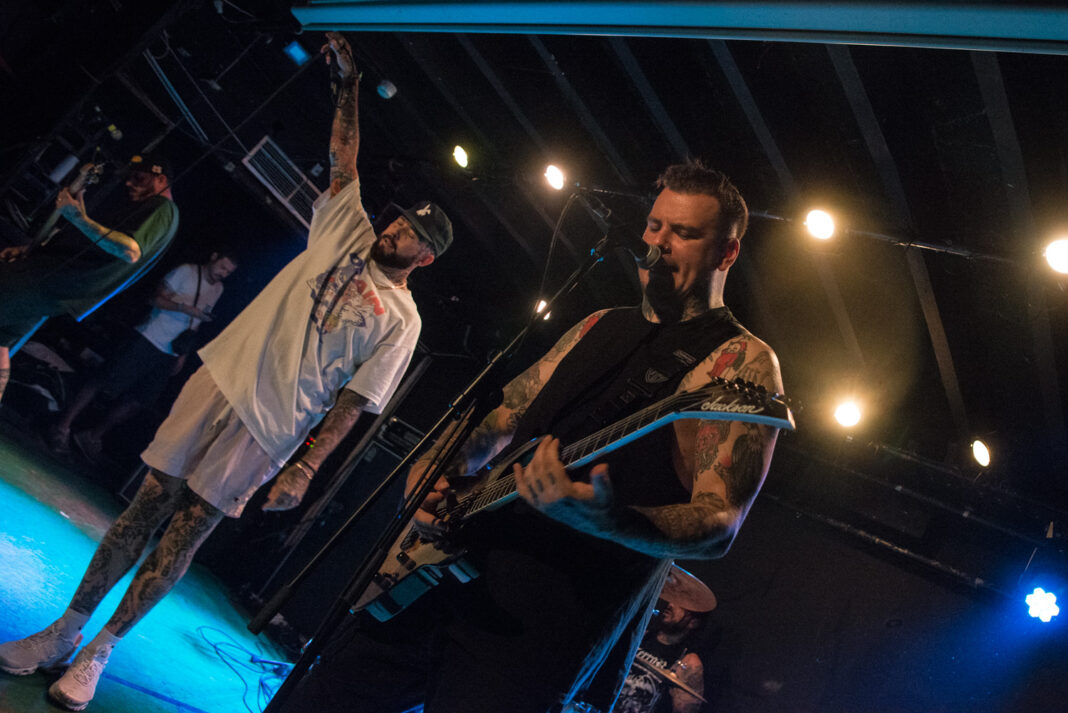 The night was a complete success as it started feeling a little stale in Zagreb, as we became very very spoiled in terms of concerts as we very quickly got used to having no less than 3 concerts in a week we want to see and experience. The last concert was on Saturday (Steel Panther) and last night was a perfect opportunity to get us through the week until the next one, the long awaited Kiss concert in Zagreb. Finally, Zagreb became a very important place were concerts are held and even new tours are being started, as we witnessed lately from Iron Maiden.

The night was opened by special guests .upset is a 5- member hardcore band from Zabok, Croatia. The band was formed around 2002 and has originated in Marko Tršinski (drummer) garage in order to invigorate local underground scene. In these past 14 years, .upset has recorded two demos and three full length albums; “Opiate For The Masses” (2010), “Slaves Of The New World” (2014) and “Tied To Our Screens” (2020), along with an EP “Dark Times” (2016.). Band played dozens of concerts alongside many hardcore bands including bands like Madball, Pro-Pain, First Blood & Slapshot. The band offers powerful hardcore riffs lyrically accompanied by critical approach to all forms of social injustice that the local scene is lacking of. That’s indeed a specialty of the band as a level of social injustice in today’s society is off the charts and can’t even be measured any more due to an overwhelming effect which caused the effect that majority of youth today in Croatia have only one plan: run away from this rotten state and build a better life abroad. The concert was enabled by Markos trip from Germany and luckily his trip was safe so we could enjoy the concert with all members present as nowadays you never know what can go wrong regarding travelling plans if they include airplane travel or “health precautions”.

The definition of the word “upset” is: “make (someone) unhappy, disappointed, or worried”. The band gave a very energetic and fired up performance that was the complete opposite of disappointment as we couldn’t be more happy to see a domestic band gave their all on stage and ignited the audience into the point of boil. But the main theme and lyrical preoccupations evolve around a very painful social injustice in our society and that the main aim in a burning desire to create a better society: you should get brutally upset and angry and have an aim to point out to injustice and do all you can to eradicate them!

Being a band from Zabok, they were naturally filled with witty jokes which enabled the audience to loosen up and enjoy themselves to the fullest. The main advantage of the band is unified and energetic stage performance of all band members out of which three members sing and perform back vocals which ignites the audience into a sing along and way better feedback than expected. The bassist Marko Plečko, which is also a photographer, stood out and along with other band members shown us what it feels like to finally be on stage once again after a long corona break and made all be glad for their success and long awaited concert in Zagreb.

The legendary Australian hardcore DEEZ NUTS finally took over the stage! This was indeed a long awaited gig which turned MOČVARA into a burning hard core hell. Deez Nuts were founded in 2007 in far away Melbourne, Australia. The band is one of the most prominent names of his genre in the world with a total of six albums released so far and with one EP. The last release titled “You Got Me Fucked Up” was promote on this occasion, but it will also was an opportunity to hear the greatest hits from the discography so far. The band is consisted of: vocalist JJ Peter, guitarist Matt Rogers aka Real Bad and drummer Alex Salinger.

Unfortunately the venue wasn’t fully filled with fans as holiday and festival season already started and many were already away from the city with other plans. But the fact gave this gig a very special, intimate atmosphere as we felt like only hardcore fans have put all other plans aside and came.

The absolute highlight of this night were performances of: “Tonight We’re Gonna Party Like There’s No Tomorrow” and “Stay True”- an absolute ultimate hit that gave us the feeling of being invincible in facing all the life’s troubles, as that’s the only thing we have when facing all life’s troubles: when all else fails: when work, family and all other aspects disappoint you: all you have is to believe in yourself and keep going against all odds. We fucking adore that song as it makes the “feeling dead inside” people rise up and find the energy to endure all and feel victorious. We couldn’t be more happy to finally see the legends live on stage and hopefully many more chances will arise for those who had the misfortune to miss this incredible experience!