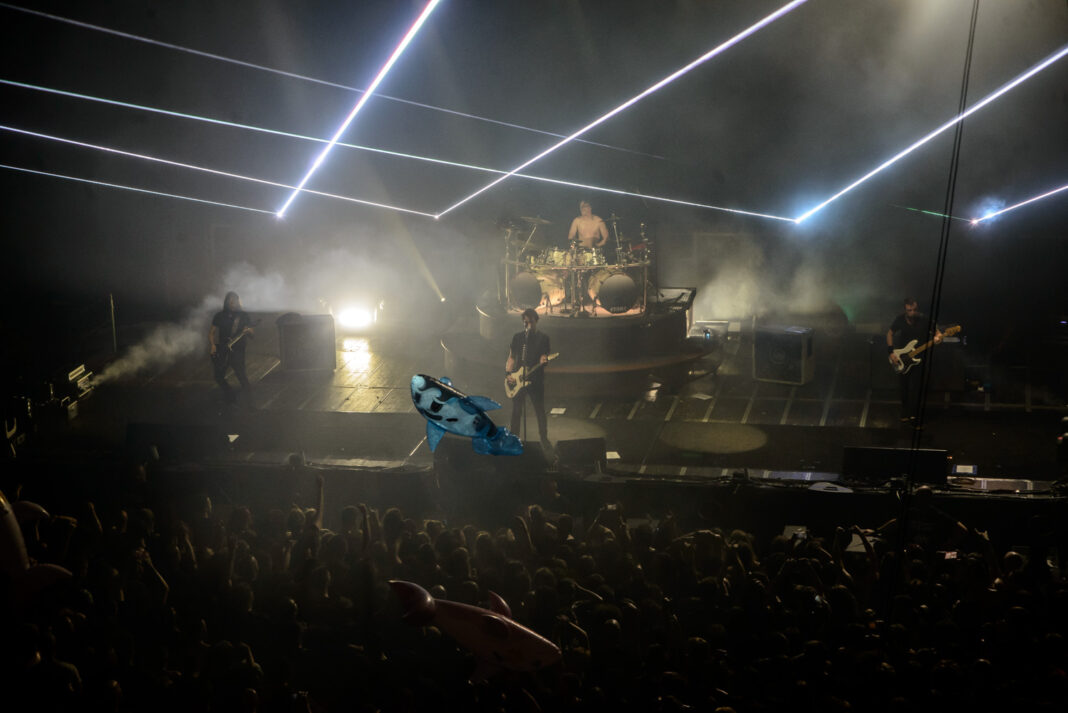 Support bands for the Zagreb gig were Alien Weaponry and Employed To Serve. EMPLOYED TO SERVE is a British heavy metal band from Woking, England. The band was formed in 2011, by current members Justine Jones and Sammy Urwin. Their album „Conquering“ was elected by Loudwire as the 41st best rock/metal album of 2021. The track “Exist” was elected by the same publication as the 6th best metal song of the same year.

They gave an excellent performance, but unfortunatelly they started played before the scheduled 8 PM- so the venue wasn’t completely full, which was a crying shame. Luckily, the venue was packed after the first few songs. This concert was attended by many fans from all over the region and some were travelling for hours and not all were able to arrive at exact time. But nevertheless, the singer was great and quickly drawn the attention from the audience standing outside the venue and created a boiling atmosphere for the bands ahead.

ALIEN WEAPONRY were formed in 2010 and represent one of the most exciting young metal bands in the world right now. Alien weaponry are a three piece “Te Reo” metal band, out which all three have Māori ancestry. Many of their songs are in New Zealand’s native language “Te Reo Māori ” and they represent a unique mixture of thrash metal and hardcore music that is simply contagious. Their debut album “Tū” being acclaimed worldwide and included in many “Top albums of 2018” lists.

Majority of the audience were extremely excited to see them live, as they offer a real refreshment due to their uniqueness. Their performance which had an amyzing intro performance was stunning, unique, raw and energetic, so they quickly engaged the audience into a trance-like moshing. It’s well deserved to say that Alien weaponry are taking the world by storm right now and be sure to follow all their future endeveours!

GOJIRA had the most beautiful intro into their concert, as I fell like it’s been decades from the last time a saw the intro into the concert which had a gigantic stage curtain falling down at the second the concert starts. To make everything even more exciting: the band prepared a gigantic countdown of seconds on the curtain to give the audience the feeling they will experience one of the greatest moments in life and indeed it was! The effect of that intro was even grater considering that we had a very long pause from the concerts due to the pandemic and I even went to see a show with a friend which had the experience of beeing at the concert for the first time after two years. So, the exciment in the audience went sky high and through the roof as first sounds from the magnificent „Born for One Thing“ started!

Third song was their masterpiece „Stranded“, which has been recogised as one  of the best metal songs of all time. The band played seven song from the album „Fortitude“ and the setlist was tailor-made to safisfy even the biggest fans!

Right after the song „Stranded“  the audience was put in complete ecstasy through the first chords of „Flying Whales“, which created a festival-like chaos and exhilaration, as fans have stared the crowd surfing of infatable whales and dolphines. It was an beautiful experience and sight: pure perfection!

Engagement of the band with the audience was great! Many guitar picks and especially many drums sticks were thown into the audience. The band also heated up the atmosphere with demonstating signs in Croatian which was followed by the biggest roar from the audience ever and heated the atmosphere to the boil!

The concert was closed by another nmasterpiece „Amazonia“ and all members came out for the longest ovations I’ve ever seen in my life. It could be felt that the audience was completly satisfied although the concert was so good that it seamed that it ended too soon; but I strongly belive all should be satisfied as it was one of the most beautiful musical treats that cannot be seen very often.

Gojira gave a perfect performance and demenstarted in detail exactly why this highly influental band has earned so many awards and have also been named as one of this century’s most important underground metal institutions. They are also known as titans of groove metal, which of course has a unique mixture of progressive and technical death metal styles. We will remeber this concest as one of most treasured momens of the decade, as I think hardly any band can provoke so much happines, ecstasy and pure satisfaction among such a numerous crowd!