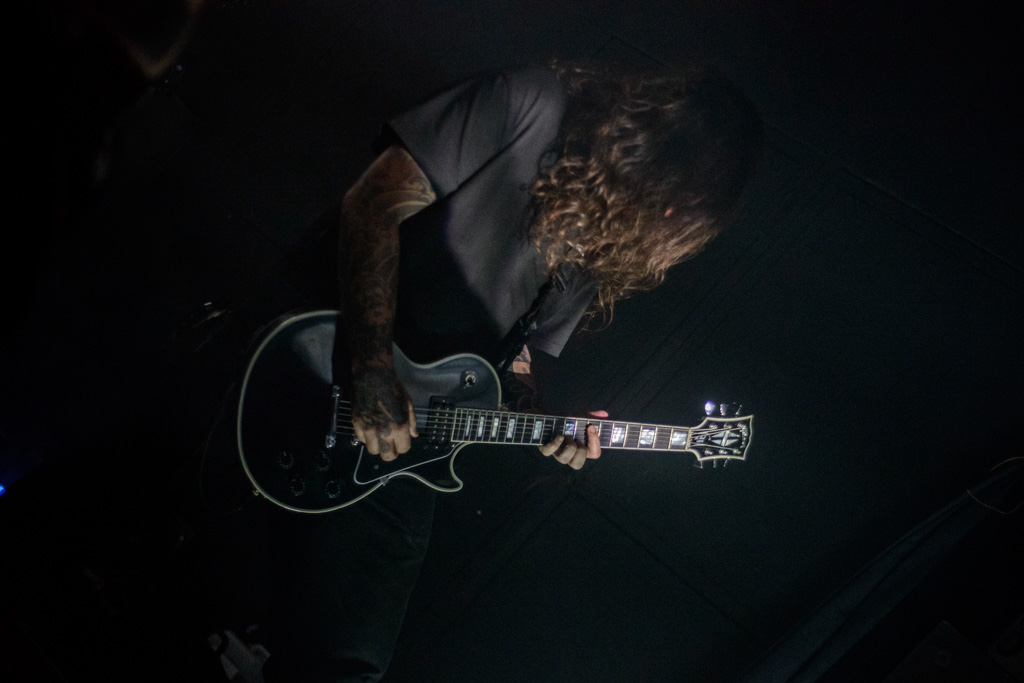 Amenra is a Belgian band from Kortrijk. It was formed in 1999 by vocalist Colin H. van Eeckhout and guitarist Mathieu Vandekerckhove, who now perform alongside drummer Bjorn Lebon, guitarist Lennart Bossu and bassist Tim De Gieter. Among a number of other works, they have released six studio albums in the Mass series, the latest of them through Neurot Recordings. The band’s unique musical style, characterised by brooding atmospheres and spiritual intensity, is rooted in doom metal, hardcore punk and post-rock. Their live performances, accompanied by visual art, have been described as “entrancing communions”. In 2005, Amenra formed Church of Ra, a collective of collaborating artists which now includes Oathbreaker, Black Heart rebellion and others.

We saw Amenra perform at MetaDays a few days before this concert and I must admit that maybe I didn’t focus entirely on that specific concert due to overlapping performances of the other band on the second stage. But, nevertheless my impression is that this is a band that defintelly functions best in clubs as they are able to create a more intimate atmosphere and definitely receive better feedback from the audience.

Immediately after we entered the venue the suspense of waiting for the band started to rise and it was very successfully strengthened by smoke effects. A fellow reporter stated: „It feels like we have entered a church“, and indeed it was exact but the church we have entered was named: Church of Ra. The suspense, joy and overwhelming feeling of excitement was at an absolute peak just seconds before the band entered the stage, also felt through screams from the fans in the audience.

Church of Ra has constantly gaining base of followers, members of the Church Of Ra, a sect, now thousands in numbers can be counted.

Amenra’s musical style has been described as post-metal, sludge, post-hardcore, doom and ethereal hardcore. It has also been noted to bear a resemblance to black metal, gothic folk and post-rock.

For me personally the greatest compliment I could assign to the band is the acknowledgement that the band has won me over in spite of my best efforts to resist as their musical style is not something I regularly follow. For an effect like that it takes great artists that are able to put into words and music the most beautiful aspects of our lives and make it relatable and make their songs bring very strong statements that stick to us and make us feel we have a bond to the meaning of the songs and the band in general. Their gentle melodic segments, lyrical expression and atmosphere perfectly glides from brutal to very gentle and emotionally soothing moments.

The concert opened with „The Pain It Is Shapeless“ and the magnificent conclusion of the concert was the performance of the song „Diaken“. The band’s energy, performance and engagement with the audience was perfect and as expected.

The magnificence of THE song  “A Solitary Reign” is so beautiful there are no words in this world to describe the beauty of this absolute climax of the concert. The beauty of the song is so strong that it transforms the strongest pain ever felt in our lives into something beautiful through the healing journey the band makes us take! It’s visible throughout the song that the band has put heart and soul into every note and found a magic in order to combine pain and redemption, but also a fragile state of overwhelming pain with strength. The performance of “A Solitary Reign” felt completely overwhelming and like redemption. It was almost like out of this world magical musical, emotional and spiritual cleansing of all that was weighting us down. It isn’t only a song about love and loss, it’s a song that describes life as all the losses we experienced throughout our lives could easily kill us at some point, but luckily we have our towers of strength to hold on. For some only towers of strength are BANDS LIKE THIS, like Amenra!

This was a night we experienced the touch divine that is Amenra!

MEANING OF IT ALL

Lyrical themes the band revolves around are: relationships, love, loss, pain, spirituality  and they succeed in doing it with credibility much more mature bands do not possess. Though calling himself agnostic, Colin H. van Eeckhout acknowledges the presence of spirituality and religion in the band’s work.

Although the singer Colin H. van Eeckhout spent the most part of the concert with his back turned to the audience- it didn’t interfere with the ability of the band to reach out and create closeness with their fans as the lyrics, music and atmosphere of the whole concert created a sense of familiarity and bond rarely seen before.

I feel privileged to have had this amazing experience to be at an Amera concert and all I can say is: many thanks to the band, the audience, crew and organisers that helped put this magical experience into life in our town!