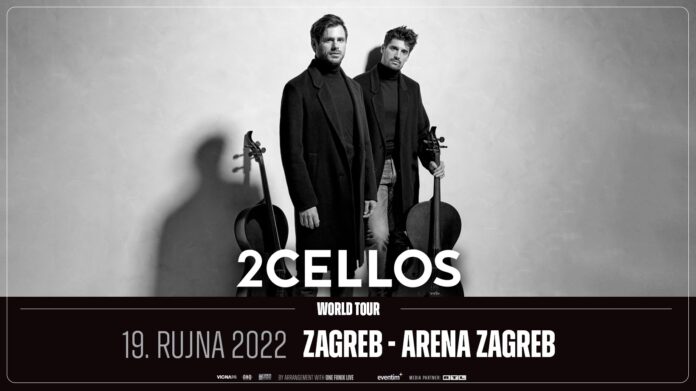 2CELLOS together again on the last tour!

LUKA and HAUSER will play for us on September 19, 2022 in Arena Zagreb. #Tickets on sale from Friday, March 4 at 10 a.m. via the Eventim.hr system!
The last live concert in Croatia!!!

2CELLOS are a Croatian cellist duo, consisting of classically trained cellists, Luka Šulić and Stjepan Hauser. Signed to Sony Masterworks since 2011, they have released five albums. They play instrumental arrangements of well-known pop and rock songs, as well as classical and film music. The duo performs internationally and have been featured on several American television series including Glee and The Bachelor.
2CELLOS signed to record with Sony Masterworks, and finished recording their first album in May 2011, which carried the Menart Records label in Croatia. Released on 19 July 2011, their debut eponymous album, includes covers of songs by U2, Guns N’ Roses, Nine Inch Nails, Sting, Coldplay, Nirvana, Muse, and Kings of Leon. The album also features a cello version of Michael Jackson’s “Human Nature.” The duo said that they chose songs that could be arranged as covers playable on just two cellos. In anticipation of the release, 2CELLOS released their second single “Welcome to the Jungle,” a cover of the Guns N’ Roses song of the same name.

Elton John asked the duo to appear with him on his 2011 summer tour, which began in Cardiff, Wales on 8 June. John, who personally called Šulić, said that he had watched the “Smooth Criminal” video and wanted 2CELLOS to participate in his thirty-city tour. The two had previously performed on The Ellen DeGeneres Show of 25 April 2011. 2CELLOS also performed at the 2011 iTunes Festival in London. They went on to perform internationally with Elton John and his band for five years, including hundreds of performances at The Colosseum at Caesars Palace in Las Vegas. They appear in The Million Dollar Piano movie filmed at the Colosseum in 2012 and on the 2013 album, The Diving Board.

The duo performed an arrangement of “Smooth Criminal” in the third season of the television show Glee. The episode in which they appeared, titled “Michael”, aired on 31 January 2012, and was the first time that the series highlighted instrumental musicians. The scene featuring “Smooth Criminal” was set up similarly to 2CELLOS’ original music video for the song. On 4 June 2012 2CELLOS performed with Elton John at the Queen’s Diamond Jubilee Concert at Buckingham Palace. On 12 June 2012, 2CELLOS performed in front of a full Arena Zagreb audience. The concert was filmed for DVD: Live at Arena Zagreb.

Although the two usually record covers of rock songs, Šulić and Hauser said they still play with orchestras and will not abandon playing classical music. The cellists said they would someday like to go on tour with both a classical and a contemporary orchestra, a hope that was fulfilled in part during their tour for the album, Score. Their second studio album, entitled In2ition, came out early in 2013, and featured new twists on a diverse range of classic tracks with a few surprise vocal and instrumental duet partners including Elton John, Lang Lang, Naya Rivera, Steve Vai, Sky Ferreira and Zucchero. The album was produced by Bob Ezrin.

In July 2013, they filmed a commercial for the Japanese mobile phone company Docomo. Their album In2ition debuted on the Japanese Albums Chart, in August 2013 at number 1. Since then, they have done commercials for the US National Football League Thursday Night Football, for 1906 Reerva Especial  and they have done several print campaigns for the Italian designer, s.Oliver.

As a part of their world tour with Elton John, including concerts in North America, Europe and Asia, 2CELLOS performed at Madison Square Garden two days in a row, in December 2013. In March 2014, they had a solo Japanese tour.

In 2015, 2CELLOS released their third album, Celloverse, which they also co-produced. The album contains a diverse array of renditions including AC/DC’s “Thunderstruck”, Avicii’s “Wake Me Up”, Michael Jackson’s “They Don’t Care About Us”, Hans Zimmerʼs “Mombasa” (from Inception), and an original work titled Celloverse, among numerous other covers.

2CELLOS has used YouTube to reach out to their audience, posting videos of notable live performances, including Arena Zagreb (2012), Arena Pula (2013), EXIT Festival (2014), and their fifth anniversary concert at Arena di Verona (2016) in Italy. In February 2014, the duo published their rendition of AC/DC’s “Thunderstruck” to YouTube. The video depicts the duo playing before a Baroque audience, which soon finds out that the song is anything but classical. The video went viral at the beginning of March, gathering 10 million views in the first two weeks. As of March 2021, the video has garnered over 200 million views.

As Šulić told The Sydney Morning Herald, “we love AC/DC as much as Bach.” Hauser added, “both (AC/DC and Bach) are simple and convincing in what they do.”

In 2017, Šulić and Hauser released their fourth album Score, recorded with the London Symphony Orchestra which included a wide array of television and film music. To mark the album’s release, 2CELLOS released their official YouTube video for Game of Thrones Medley, which garnered over 1 million views in two days.