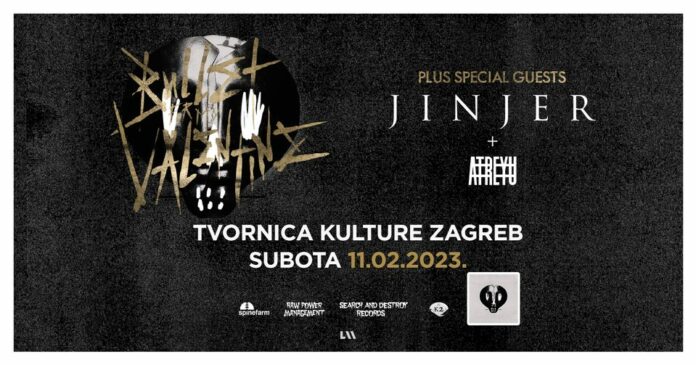 LAA PRESENTS:
BULLET FOR MY VALENTINE
+ JINJER AND ATREYU
FACTORY OF CULTURE
ZAGREB
SATURDAY, 11.02.2023.
Metal veterans Bullet For My Valentine are returning to Zagreb, and they will arrive at Tvornica kulture on Saturday, February 11, 2023, accompanied by the bands Jinjer and Atreyu.
After the postponed performance in February 2022, the new date brings a real metal celebration, and everyone who didn’t return their tickets can enter this big concert with them.
Since bursting onto the scene in 1998, the Welsh metal legends have become one of the genre’s biggest bands. Bullet For My Valentine have sold over 3 million albums in their almost 25-year career, including three gold editions, and are considered pioneers of the modern British metal core sound, which they defined in a way with their classic album “The Poison”. What’s more, they are the only island group to have won the “Best British Band” award three times at the Kerrang magazine awards!
The new studio album is named after the band itself, and it is probably the strongest and fiercest release in their catalog announced by the excellent single “Knives”. The new album was succeeded by “Gravity” from 2018, after which the band went to concerts in arenas and the most famous halls such as London’s Alexandra Palace. This time they return to the basics, with solos and riffs that will delight new and old fans, and as part of the big world tour on the occasion of the new album, BFMV will visit Croatia. The concert in Boćarski dom will be their first in Zagreb after four years.

The media unanimously praise the new album. Kerrang calls it the fiercest yet, and says that BFMV is firing all guns blazing and the album sounds huge. Sonic Perspectives says it’s the album’s stunning heaviness that draws you in and makes it interesting. The Rock Pit says that the impressive album full of heavy riffs and solos perfectly fits the times we live in, Crypticrock praises the technical skills and composition of the album that is exciting and intriguing, while New Noise Magazine says that the album is an incredible work that is definitely worthy of the name “Bullet For My Valentine.”

They are joined by a Ukrainian metal hurricane called Jinjer, who return to Zagreb three years after, after the record-breaking sold-out KSET and great interest, they sold out the large plant of Tvornica kulture. The four-member metalcore band became a sensation around which the dust is rising after the third album “King of Everything”, after which they ended up on Billboard’s Next Big Sound chart. The albums “Macro” and the successor “Wallflowers” were declared by Loudwire as one of the best metal albums, and the great vocalist Tatiana Shmailyuk with her abilities perfectly complements the music in which they experiment with groove metal, even funk and reggae.
Four-piece metal punk rock band Atreyu from California joins the lineup for the night. With eight albums, they regularly ended up on the Billboard album charts, they went on numerous world tours, and in their list of collaborations they already include performances with BFMV, as well as those with Slipknot, or Travis Barker from Blink182.
All tickets for the postponed BFMV concert from February 2022 are also valid for the new date and concerts.
Advance sale HRK 220
On the day of the concert HRK 250
The sales points are Dirty Old Shop, Rockmark and Aquarius in Zagreb, Dallas Music Shop in Rijeka, and all points of sale of the Eventim system.