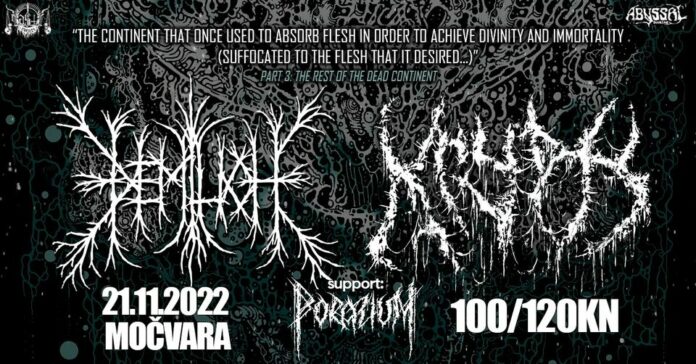 Abyssal Booking and Nasty Events in cooperation with Močvara club present to you with great pleasure and even greater happiness another opening of the gates of hell with a death metal treat in the days when we tread the last days of autumn.
Demilich (Death Metal, Finland)
https://www.facebook.com/demilichband
https://demilich.bandcamp.com/
https://demilich.band/
Antti Boman – Vocals/Guitar
Aki Hytönen – Guitar
Jarkko Luomajoki – Bass
Mikko Virnes – Drums
DEMILICH!!! Yes, Demilich! The legendary Finnish death metallers are finally coming to visit us! They have deservedly become one of the most legendary bands to emerge from the Finnish death metal underground. In the era when Convulse, Demigod and Adramelech created and were the best, the boys from Demilich gave their all to evil. And what kind! Although they are obscure in a wider picture, they are actually very well known in the death metal underground and probably do not need to be introduced to most underground death metal fans. Demilich could be considered one of the most important bands in codifying the “dissonant and technical” style of death metal alongside Canada’s Gorguts. The sheer experimentation with this music represents an advancement of the genre that has rarely been equaled elsewhere, and the music is far more complex than meets the eye.
The band was formed in Kuopio, Finland during 1990 by singer/guitarist Antti Boman, bassist Jussi Teräsvirta and drummer Mikko Virnes. Cassette demos of ‘Regurgitation Of Blood’ and ‘The Four Instructive Tales… Of Decomposition’ appeared the following year, after which Barathrum guitarist Aki Hytönen was recruited into the band. “Somewhere Inside The Bowels Of Endlessness…” followed in 1992. And then… in February 1993 Demilich released his debut album “Nespithe” which has aged so well over time that it’s an understatement to say it’s great. The word we are looking for is classic. No normal human is capable of reproducing the effect of the free vocal madness displayed by Antti Boman on the only, completely unique album of these maniacs. In death metal, this album is as important as Beethoven’s 5th symphony. The band originally broke up in 1993, but resurrected in 2005-2006. 2010 and is now active since 2014.
________________________________________
Krypts (Death metal, Finland)
www.kryptsdeath.com
www.facebook.com/Kryptsdeath
Antti Kotiranta – Vocal / Bass
Ville Snicker – Guitar
J. Lilja – Guitar
Otso Ukkonen – Drum
So who is visiting us again? They came to Močvara with Jupiteriana a few years ago, swept us all away and now they’re coming back to rehearse! Excellent Finnish death metal. Complex ominous sounds of devastation a dark mix of doom and death. Summoning evil priests of darkness from unknown lands, singing in the dead of night under the dark cold moon. Summoning ancestral spirits into reality. Darkness is sweeping the world. There will be no saving your lives, so feel free to prepare to meet the darkness. You will be mesmerized under the spell of atmospheric Death Doom.
________________________________________
Porazium (Death metal, Zagreb)
https://www.facebook.com/porazium.metal
Darko Ćosić – Vocal
Marin Lelas – Guitar / Vocals
Antonio Vlahov – Bass
Goran Goc Lučić – Drums
Death metallers from Zagreb made up of members who had previously played in several Zagreb bands (Usud, Namet, Sarednik Lobanja and Vod Smrt, Muka, Stribog…) and this is their second concert ever!
They released an album called Bigger the care, bigger the hate this year and will be happy to present it to us!
Attack: 100/120
Entry for under 18s is free upon presentation of ID at the entrance to Močvara