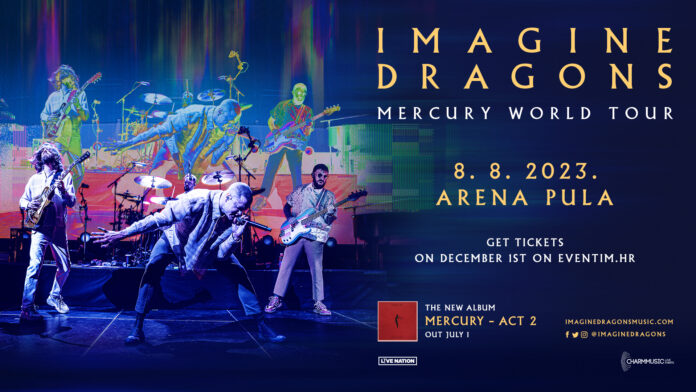 NEXT SUMMER, IMAGINE DRAGONS ARE COMING TO THE PULA ARENA AS PART OF THE MERCURY WORLD TOUR!

Grammy Award-winning multi-platinum rock band Imagine Dragons have announced nine new concerts in Europe and the Middle East as part of their Mercury World Tour.
Imagine Dragons, one of the most sought-after bands today, will perform in the Pula Arena on August 8, 2023! Authors of the hits “Radioactive”, “Believer” and “Demons”, Grammy winners and one of the most popular bands of all time, are coming to our premises for the first time.
The concert in Pula is part of the Mercury World world tour celebrating the release of their big and long-awaited album “Mercury — Acts 1 & 2”. The tour starts at Smukfest in Denmark on Wednesday, August 2nd, and after concerts in Italy, Croatia, Poland, Lithuania, France, Israel and Greece, they finish the tour in France in Chambord on Sunday, September 8th.
Over the past half decade, Imagine Dragons have become one of the biggest and most compelling rock bands in the world. The band that redefined rock in the 21st century, filling stadiums and creating record-breaking anthems. This quartet from Las Vegas with a diamond Grammy certificate is rightly called one of the biggest rock bands today, and their achievements and numbers speak for themselves. Calculating cumulative sales of 66 million albums, 55 million digital tracks and 110 billion streams, they stand out as the only band in history with four RIAA diamond singles; “Radioactive” (14 times platinum), “Believer” (10 times platinum), “Demons” (10 times platinum) and “Thunder” (10 times platinum).
Since their emergence in 2009, Imagine Dragons have had five consecutive top ten albums on Billboard’s Top 200 albums chart; “Night Visions”, “Smoke + Mirrors”, “Evolve”, “Origins” and “Mercury – Act 1”.
With the release of the “Mercury – Act 2” album this year, they completed their first double album produced by the legendary Rick Rubin. Dominating radio, they remain one of only four bands to ever achieve simultaneous Top 5 singles at Alternative Radio, and the only band to repeat the feat.
They’ve collaborated with everyone from Kendrick Lamar, Lil Wayne and Wiz Khalifa to Avicii and film composer Hans Zimmer. They’ve raised millions for various charities, including their children’s cancer charity the Tyler Robinson Foundation, and the LOVELOUD Foundation and frontman Dan Reynolds’ festival to support LGBTQ+ youth. In 2022, Ukrainian President Volodymyr Zelensky appointed them ambassadors for UNITED 24, which helps raise humanitarian aid for Ukraine.

Tickets for the Imagine Dragons fanclub and VIP packages go on sale Tuesday, November 29. Regular ticket sales start on Thursday, December 1, at 10 a.m. via the Eventim.hr system. Ticket prices range from 640 to 800 HRK.