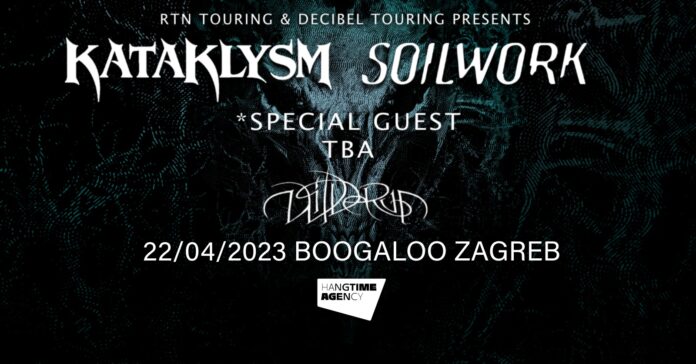 Metal giants Kataklysm and Soilwork are coming to Boogaloo!
On Earth Day, a big metal treat at Boogaloo: the legendary Soilwork
premiering in Croatia, the favorites of the local audience Kataklysm are returning after 11
years, and with them on tour are the awkward guys from the USA, Wilderun! Limited
contingent early bird tickets at a price of 23 euros can be purchased until December 1 or
until stocks last in the Dirty Old Shop, after that the price will be 27 euros, and at the entrance if they remain, they will cost 31 euros. You should put Saturday, April 22, 2023 in your calendar for this metal spectacle!
Kataklysm have performed several times in Croatia and it can rightly be said that they are their local fans they love a lot, and in general, as a band, they are known for a very cordial relationship with everyone who follows their work of this band. They were founded back in 1992 in Montreal, Canada, and have been around for 30 years became one of the most significant representatives of extreme/melodic death metal in the world.
So far, they have released 14 albums, and they will present the latest Unconquered to the Zagreb audience at this concert.
https://www.facebook.com/kataklysm/

Soilwork is one of the most popular melodic death metal bands in the world, and they are coming of course from the country that can be considered a synonym for this genre, Sweden. They were founded 1995 in Helsingborg under the then name Inferior Breed, but they took the current name a year later. In their very rich and impressive career, they have released 12 albums, of which they are some true classics of the genre, and the last of them, Övergivenheten, was released in August 2022 and will promote it in Boogaloo on this occasion.
https://www.facebook.com/soilwork

Wilderun is an American prog/folk/orchestral metal band that was founded in 2008 in Boston, but in the true sense, active since 2012. So far they have released four albums, and “Epigone” which is light day saw this year has a great reception from the audience and critics, for example the legendary Angry Metal Guy rated it 5/5!
https://www.facebook.com/OfficialWilderun/